Ian Clifford has resigned from his position as Chief Executive Officer (CEO) of ZENN Motor Company Inc (ZMC) and has assumed the role of Founder and Vice-Chair of the Board of Directors of ZMC. Clifford, who founded ZMC in 2001, will continue to play a key role in defining ZENN’s future vision and strategic plans, the company said.

As anticipated ZENN has stopped producing vehicles and will instead focus on developing electrical vehicle drivetrains based on EEStor’s technology. ZENN has the exclusive rights to use the EEStor technology in vehicles with a curb weight of up to 3000 pounds. There has been little news of late on the progress of EEstor’s ultracapacitor based power systems. – Marc Cesare Learn more: Treehugger.com

Funded by the California Air resources Board, the rebate project provides $4.1 million to promote the use and production of zero emission vehicles.  Individuals or business owners of eligible vehicles purchased or leased after March 15, 2010 can receive up to $5,000 per light-duty vehicle until the funding runs out. Certain zero-emission commercial vehicles are eligible for rebates up to $20,000.  The list of specific eligible vehicles has not been released yet but categorically the list will include “…cars, trucks, commercial medium- and heavy-duty vehicles, motorcycles, neighborhood electric vehicles”.  A related California alternative fuels program had provided funding for NEVs from GEM, ZENN, Miles EV and ZAP in the range of $1,000 to $1,500 per vehicle. – Marc Cesare

ZENN announced that it will be stopping production of their LSV in April 2010. As had been reported earlier the company is shifting it’s focus to the development of electric drivetrains based on EEStor technology. The company reports selling about 500 of their LSVs in three years.

In another story about phasing out a vehicle, a careful examination of ZAP’s most recent quarterly findings, seem to indicate that they will be phasing out their three-wheeled Xebra model. From their 10-Q for the quarter ending September 30, 2009:

The decrease of $1.5 million (in revenue) is primarily due to the phase out of our three wheeled Xebra vehicle with reduced selling prices.

In addition the company appears to be putting less emphasis on development of the Alias model.

ZENN Motor Co. is looking for sites to build a R&D facility that will focus on  developing their Zennergy Drive System. The facility will have an initial budget of $40 to $50 million over three years according to CEO Ian Clifford.  ZENN has applied to the governments of Ontario and Michigan for financial assistance.  Government funding will be a major factor in choosing where the facility is located.  Learn more:  Montrealgazette.com

ZENN recently announced that they will not be mass producing the highway capable cityZENN and instead will focus on developing their ZENNergy Drive Systems, which incorporates EEStor technology.  The change probably means an exit from the LSV manufacturing business as well.  Management notes competition from a large number of well-funded new and existing automotive OEMs that have now entered the electric vehicle market as a factor in the decision to become more of a supplier to vehicle OEMs rather than a vehicle OEM itself.

This strategy plays into ZENN’s technology advantage arising from their relationship with EEStor, of which ZENN owns 10.7%.  Of course this relies on EEStor delivering on their promised technological advancements. With regards to the viability of EEStor’s technology, ZENN CEO Ian Clifford states,

EEStor has publicly stated that they expect to complete initial component testing in September 2009 and deliver functional technology to ZMC by the end of the year.

In the third quarter ending June 30, 2009 ZENN Motor Co. reported selling just 19 vehicles compared to 67 for Q3 2008.  This is slightly more than the previous quarter when only 16 vehicles were sold compared to 54 the prior year.  In the first half of 2009 ZENN has now sold a total of 35 vehicles compared to 121 in the first half of 2008.  This a decrease in unit sales of 86 or 71% from the prior year.  The management points to the decline in the overall economy as well as lower fuel prices as key factors in the decline.  Learn more:  Reuters.com

ZENN recently reported that a third party had certified an important technology milestone reached by EEStor.  Independent tests showed that…

…the main material in the ultracapacitor technology achieved relative permittivity of at least 22,500 over an operating range of -20 to +65 degrees Celsius. Permittivity is a measurement of how much energy can be stored in a material.

Per the agreement with EEStor, reaching the milestone triggers an additional $700,000 payment by ZENN and an opportunity to increase their equity stake.  The next milestone is to commercialization of the technology, which according to the agreement, is supposed to start by the end of 2009.  ZENN still plans to incorporate the ultracapacitor technology in vehicles in 2010.  Learn more:  cleantech.com

A recently granted patent provides some more information about the company’s much anticipated technology.  According to one analysis of the patent

An EESU (Electrical Energy Storage Unit) weighs 281 pounds, has a volume of 2.63 cubic feet, can be fully charged in 3-6 minutes, is completely unaffected by temperature, will not explode or catch fire in an accident, and provides 52 kWh of electricity. 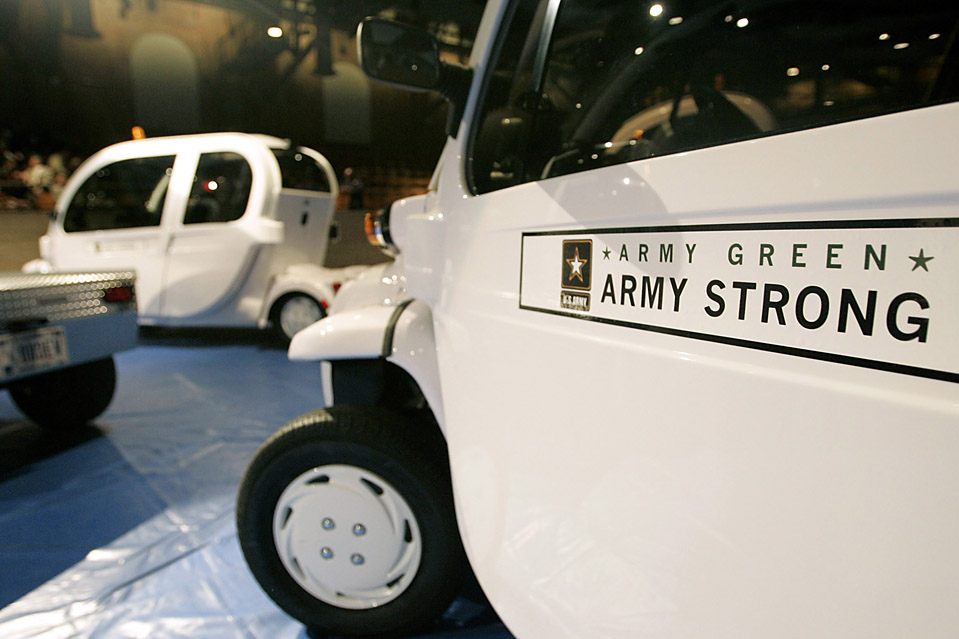 Not all of the vehicles will necessarily be GEMs which were procured through the GSA. The GSA currently lists GEM, Columbia ParCar, E-SUV and ZENN as LSV vendors. In an interview with bloggers, Paul Bollinger, Deputy Assistant Secretary of the Army for Energy and Partnerships, remarked that he expected to see more manufacturers to join the GSA list. The GSA posted a request for vendors on Fedbizopps.com today.

He also noted in the interview that the Army had identified 28,000 sedans and light trucks that could potentially be replaced by electric vehicles, either LSVs or higher speed vehicles. Part of the reason they have moved to LSVs is that fueling station infrastructure for alternative fuel vehicles has not been able to keep pace with vehicle acquisition. The necessary infrastructure costs would be in the millions of dollars while the installation of three-prong outlets for charging the LSVs will only cost an estimated $200 per vehicle.

The Army estimates an LSV saves them $3,300 compared to a full-size sedan. The LSVs will be leased for six years and maintenance and battery replacement are included in the lease. Bollinger remarked that not only will the Army save on fuel costs but also produce lower emissions and help drive the market for LSVs and battery technology. The Navy has directly expressed interest in “piggybacking” on the Army program and while the Air Force has used back channels to show their interest in joining forces.