ePower Trucks of Oldham, Greater Manchester in the UK has been named the exclusive distributor for GEM vehicles in the country.  The company already sells a wide range of electric vehicles for commercial utility and transportation applications.  Learn more:  Fleetnews.co.uk

In Huntsville, AL a local hospital purchased three GEMs and are using solar power as their electricity source.  In some instances solar panels are being installed on the roof of LSVs, golf cars or electric UTVs but in this case the solar panels are installed on top of a parking deck.  They are attached to a bank of eight batteries that are used to store the electricity until the GEMs need to be recharged.  As a side note, the GEMs were purchased to replace two gas powered vehicles.  Learn more:  blog.al.com

American Sportsworks recently introduced a hybrid utility vehicle, the ASW Landmaster Crew Hybrid.  The vehicle features two drive systems a 48V electric drive in the front and a 653cc gasoline, V-Twin Subaru, powered rear wheel drive system.  The vehicle can be driven with either drive system alone or using both together.  The batteries can be recharged while operating the gas engine.

This vehicle really exemplifies two trends in the market:  the first is the increasing presence of electric powered UTVs and the second is the ongoinging adoption of technologies and features from highway capable on-road vehicles.  Learn more:  UTVweekly.com 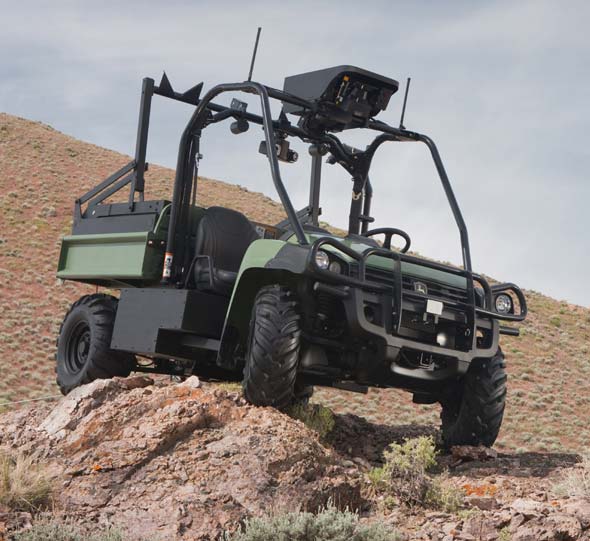 Boeing UK and John Deere recently introduced the R-Gator A3 Assisted Carriage System (ACS) robotic utility vehicle for military applications.  In development for two years, the vehicle has a 635 kg payload to help carry some of the gear modern soldiers require in the field.  The vehicle can operate autonomously or manually under daylight or night conditions.  John Deere borrowed from their M-Gator platform as well as their navigation, guidance and obstacle avoidance technology and expertise developed for the agriculture sector.  The vehicle also features “…multiple tie-down points for sling loading, underbody skid plates, a front cargo rack and a rifle mount system to carry military specific loads.”  Learn more:  Defense-update.com

I received a press release from luxury golf car/LSV manufacturer Garia last month that pushes back on some of the safety focused critics of LSVs. What is interesting to me is not so much their arguments but that a LSV manufacturer is actively confronting LSV critics.  LSV manufacturers do not have a trade association to speak with one voice for the industry and only a few of the manufacturers, Tomberlin being another one that comes to mind, have tried to combat some of the negative arguments against LSVs.  Manufacturers would certainly help their cause by coordinating some type of response to the various charges and misinformation.  Local debates concerning ordinances for using LSVs on public roads often center on safety concerns and frequently equate LSVs with golf cars.  The Garia press release follows below:

Critics of small electrical vehicles such as street legal golf carts seem to have the carts’ alleged shortcomings as their sole focus rather than the needs of consumers. However, a closer look at consumers’ needs paints a different and much more positive picture of the future of these traffic newcomers.

Getting consumers to fully embrace the electrical vehicle as a viable alternative to gasoline driven vehicles has proven to be an uphill battle. This is especially so when it comes to street legal golf carts such as LSVs (low speed vehicles) that have been charged with criticisms on speed and safety.

This is a valid argument when comparing a battery-driven LSV; most often a golf cart that has been made street legal by adding safety features such as side mirrors and seat belts, to a big gasoline-driven vehicle designed for hour-long road trips.

“We hear the same arguments over and over again, but our product was never made for the highway. It was made for short distance transportation in an urban area”, says Henrik Hansen, President of Garia Inc., a European manufacturer of luury street legal golf carts.

A recent project* aimed at demonstrating how electrical vehicles can be used to reduce greenhouse gas emissions, air pollution, and gasoline consumption in selected suburbs in California shows that trip destinations of the participating households were mostly within 3 radial miles of home, a distance that can easily be accomplished by a LSV or another electrical vehicle.

This is as good news for advocates of electrical vehicles as it is for consumers. It shows that consumers’ current driving needs matches the capability of a LSV, for example, and that consumers can cut down their gasoline budget and CO2 rate without compromising on their daily needs.

Some critics have pointed out that the rather slow speed of the LSVs (allowed to drive on public roads with a max speed of 35 mph or less) make them less safe in the traffic than traditional cars.

However, with the lower speed also comes a lower risk for the surroundings – pedestrians or cyclists – and many cities have now implemented designated lanes for LSVs.

Although safety concerns should always be taken seriously, a sensible driving style applies in all kinds of vehicles.

And what the LSVs do particularly well is meet consumers’ needs and offer a form of personal transportation that suits the green lifestyle of the future. This is guaranteed to be the key to their success.

“The Garia LSV is a luxury and quality alternative to the traditional LSV. The increasing popularity of the LSV will produce a natural need for a product that stands out from the rest and has the quality of other luxury products”, says Mr. Hansen.

To find out more about Garia, please visit www.garia.com

**According to The Sun News: “Golf Cart Safety Not a Worry in Myrtle Beach Area”, July 2nd 2011, www.thesunnews.com 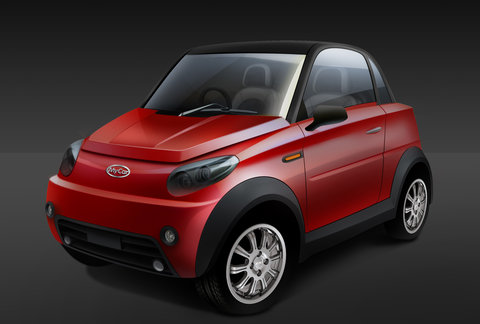 GreenTech Automotive plans to build their two seat electric MyCar in Mississippi and export them to Europe where the market for urban NEVs is likely to be more robust.  They are expected to be available there later this year.  A number of industry commentators expressed reservations about the plan’s chances of success.  Learn more:  Wheels.blogs.nytimes.com

For a third time since 2009 Bad Boy Enterprises/BB Buggies is recalling a large number of their Bad Boy Buggies electric utility vehicles.  This time the problem is a steering assembly arm that can break and cause the driver to lose control, posing a crash hazard.  To date 15 have been reported broken.  The recall includes the Bad Boy LT, Classic, XT, XTO and XT Safari models.  The following is from the US Consumer Safety Product Commission.  Learn more:  CPSC.gov

Hazard: The steering assembly arm can break and cause the driver to lose control, posing a crash hazard.

Incidents/Injuries: The firm has received 15 reports of the steering assembly arm breaking. No injuries have been reported.

Description: This recall involves Bad Boy LT, Classic, XT, XTO and XT Safari model electric off-road utility vehicles. The utility vehicles have four wheels, bench seats for the operator and passengers and were sold in camouflage patterns, hunter green, red and black. “Bad Boy” is printed on the side or front of the vehicles.

Remedy: Consumers should immediately stop using the recalled utility vehicles and contact an authorized dealer or BB Buggies for a free replacement of the steering assembly.

Polaris Industries is the lead investor for Brammo’s second round of financing totaling $28 million.  Existing investors Alpine Energy and Northport Investments are also involved in supporting the electric motorcycle manufacturer for this round of financing.  In total the company has raised nearly $40 million in financing since 2008.

Brammo is known for their battery and electric powertrain technology.  The investment by Polaris should not only have synergies with their motorcycle products but with their electric utility vehicles and recently acquired GEM product line.  Brammo has also partnered with Flextronics for manufacturing.  Learn more:  Techcrunch.com